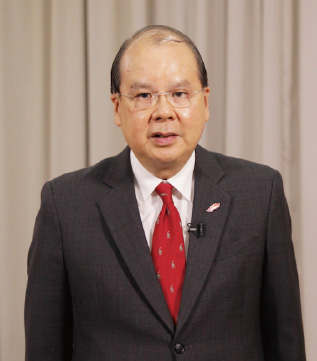 Matthew Cheung, Chief Secretary for Administration of the HKSAR, said that the Greater Bay Area Youth Employment Scheme spearheaded by the SAR government is not only helping Hong Kong companies expand their business, but also encouraging young people to pursue their career in the Mainland and to gain in-depth understanding about the latest development of the Greater Bay Area. He hopes that Hong Kong youth can seize such a historic opportunity and contribute to deepening Greater Bay Area integration, as well as the synergistic development of the regional economy.

According to Chris Sun, Commissioner for Labour, the SAR government will be granting a fixed allowance through this scheme. It will also offer support to participants’ living in the Mainland. In the long run, further cooperation with different sectors has been planned so that various convenience measures can be strengthened. These will facilitate the swift integration of local youths into the development of the Greater Bay Area. He revealed that as at the end of February, the Scheme has received more than 1,500 job openings offered by 200 companies. Amongst them, close to 800 posts are related to technology and innovation. This is yet another proof of the vast innotech development opportunities available in the region.

Charles Hui, Assistant Commissioner for Labour, sees immense potentials in Greater Bay Area development. “The pandemic has created an increasingly difficult employment context for the youth of Hong Kong. This scheme will support young people to work in Greater Bay Area cities and pursue their careers, which could help them exploit and broaden more possibilities.”

Hui added that corporate applicants must be operating in Hong Kong and a Greater Bay Area city. As for university graduates, the applicant has to be a Hong Kong resident graduating between 2019 and 2021 who owns a bachelor’s or above qualification awarded by a local or foreign university / tertiary institution. “Graduates from these three years are selected since they do not have much working experience, and it may be slightly more difficult for them to find a job under current economic circumstances.”

He further explained that participating enterprises shall engage the eligible graduates under Hong Kong Law, offering them a monthly salary of not less than HKD18,000. The government will grant a monthly allowance of HKD10,000 to the enterprises for each graduate engaged up to 18 months. “The higher salary was set after considering the average starting salary of local university graduates and additional expenses. We hope this could attract more graduates to take part in the Scheme.” 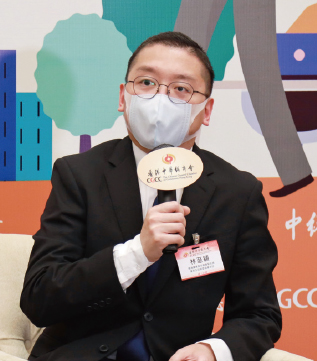 Gordon Lam, Vice Chairman of the Hong Kong Guangdong Youth Association and Chairman of its Livelihood Policies Committee, pointed out that Hong Kong has many competitive strengths. For example, the universities in Hong Kong have produced stellar performance in early-stage research and development. They are also the cradle to many technology and innovation talents, including the founders of drone manufacturer DJI and AI giant SenseTime.

He reckons that many companies in the Greater Bay Area are keen on employing Hong Kong’s youth. “Guangzhou is currently developing high-end smart manufacturing. This is in fact a huge opportunity for the youth of Hong Kong, because Hong Kong is an Asian leader in industrial design, and has been cooperating with important manufacturing cities such as Shunde and Foshan. Therefore, a Greater Bay Area career is very worth considering for Hong Kong youth.”

The Greater Bay Area is also a national leader in the high-tech domain. Lam added that the entire technology industrial chain involves a whole range of supporting professional services – an area that Hong Kong is particularly strong in.

Hong Kong youths aspiring to develop their career in the Mainland are often concerned about the differences in taxation. According to Travis Lee, Partner of the Greater Bay Area Tax Practice at KPMG, the progressive tax rates in the Mainland could be as high as 45%, but the most extreme case in Hong Kong is merely 15%. “Is the tax burden much heavier for someone working in the Mainland? We can be rest assured that taxation is a critical element in the planning of the Greater Bay Area. As such, quite many tax incentives targeted for Hong Kong people have been rolled out.”

Lee said that in some cases, no tax would be payable for working in the Mainland. The mode of employment is key. “If the employment contract is signed in Hong Kong and the salary is paid in Hong Kong, then no tax is payable for working in the Mainland. It is also stipulated in the aforementioned tax reform documents that any visit to the Mainland that lasts for less than 24 hours is not counted as a day and therefore is not subject to tax filing.” For example, if you have a technology and innovation job in the Nanshan District of Shenzhen, and you commute daily to and from Hong Kong, then, there is no need to pay Mainland taxes.

At present, the Greater Bay Area offers some subsidies that are targeted for overseas high-end talents. The nine major cities have rolled out relevant tax incentives such that the tax payable by a Hong Kong person working in the Mainland would be no higher than 15%, which is very close to the tax rate of Hong Kong. Therefore, Lee reckons that Hong Kong youth working in the Greater Bay Area do not need to worry too much about tax matters.

This is an abstract of a seminar jointly organized by the Chamber’s InnoTech, Creativity and Culture Committee and Young Executives’ Committee.