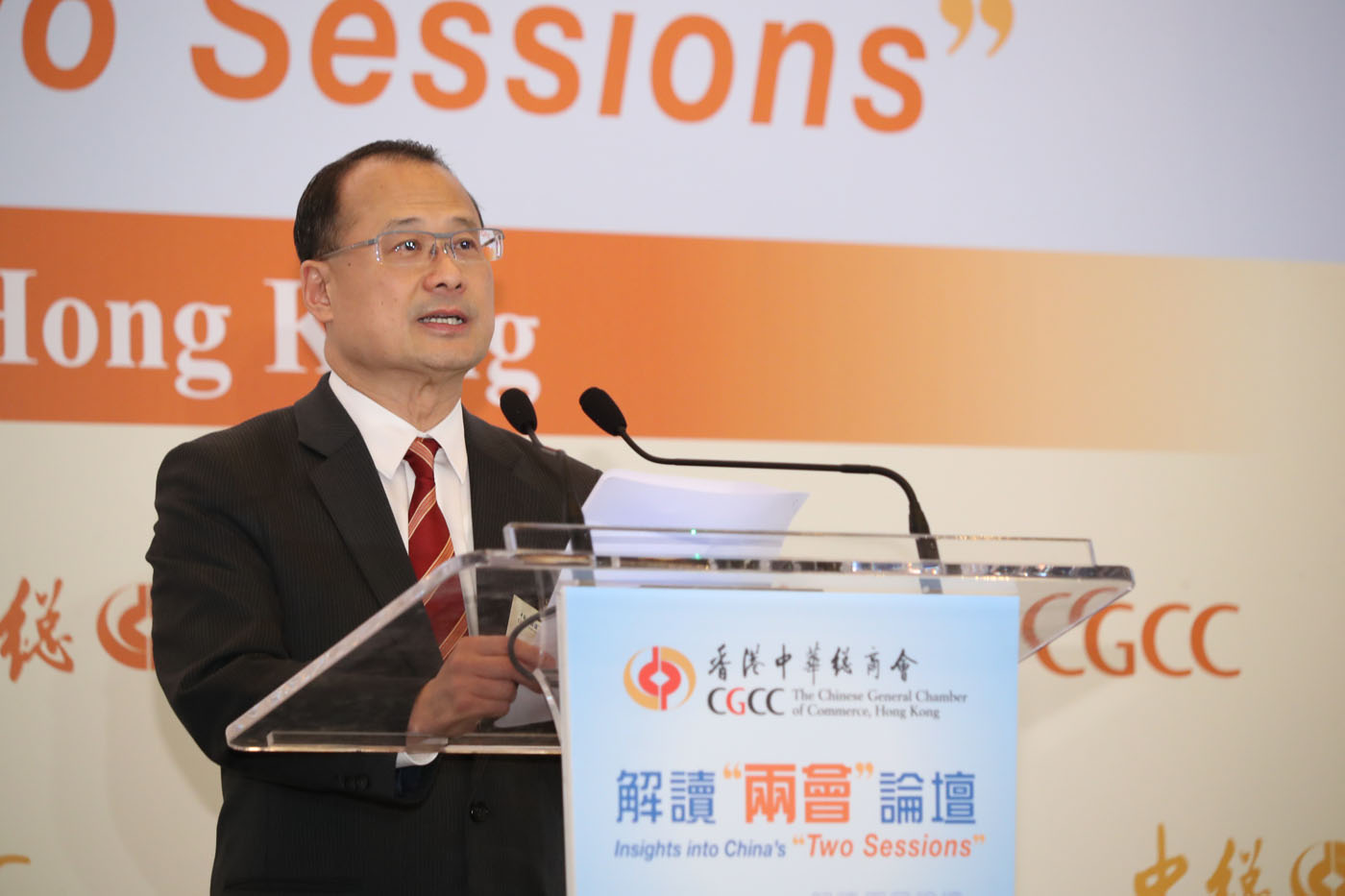 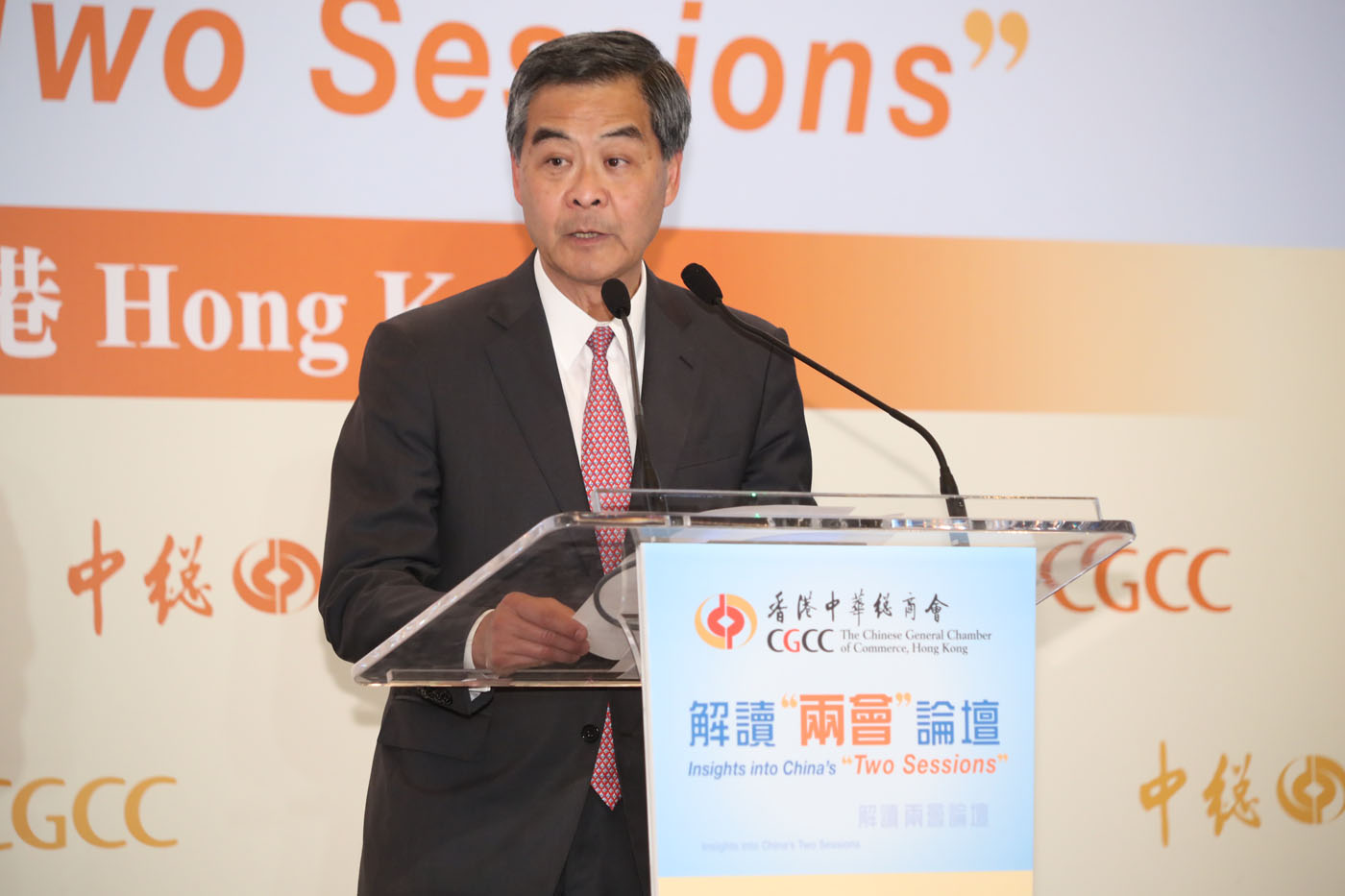 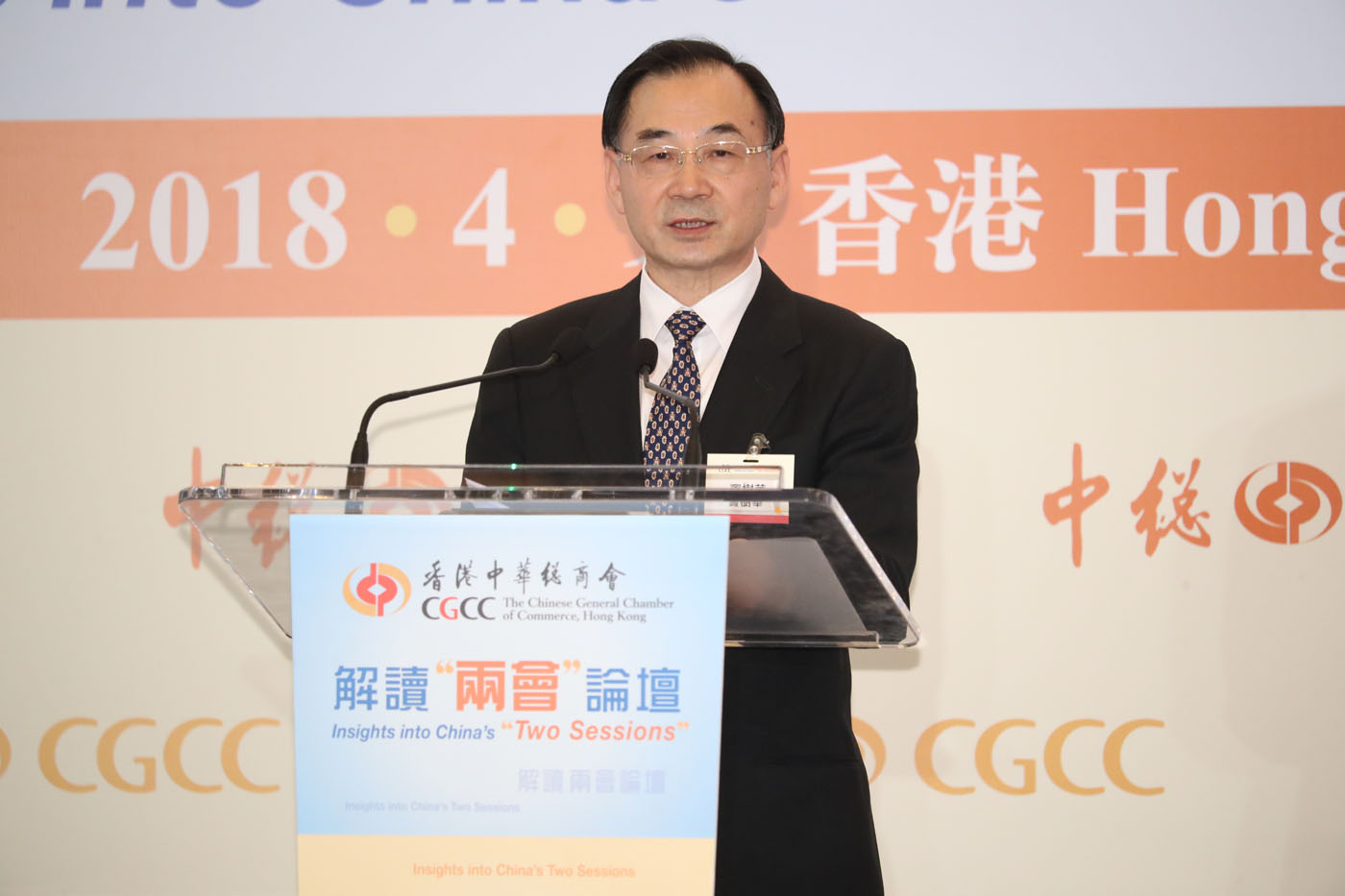 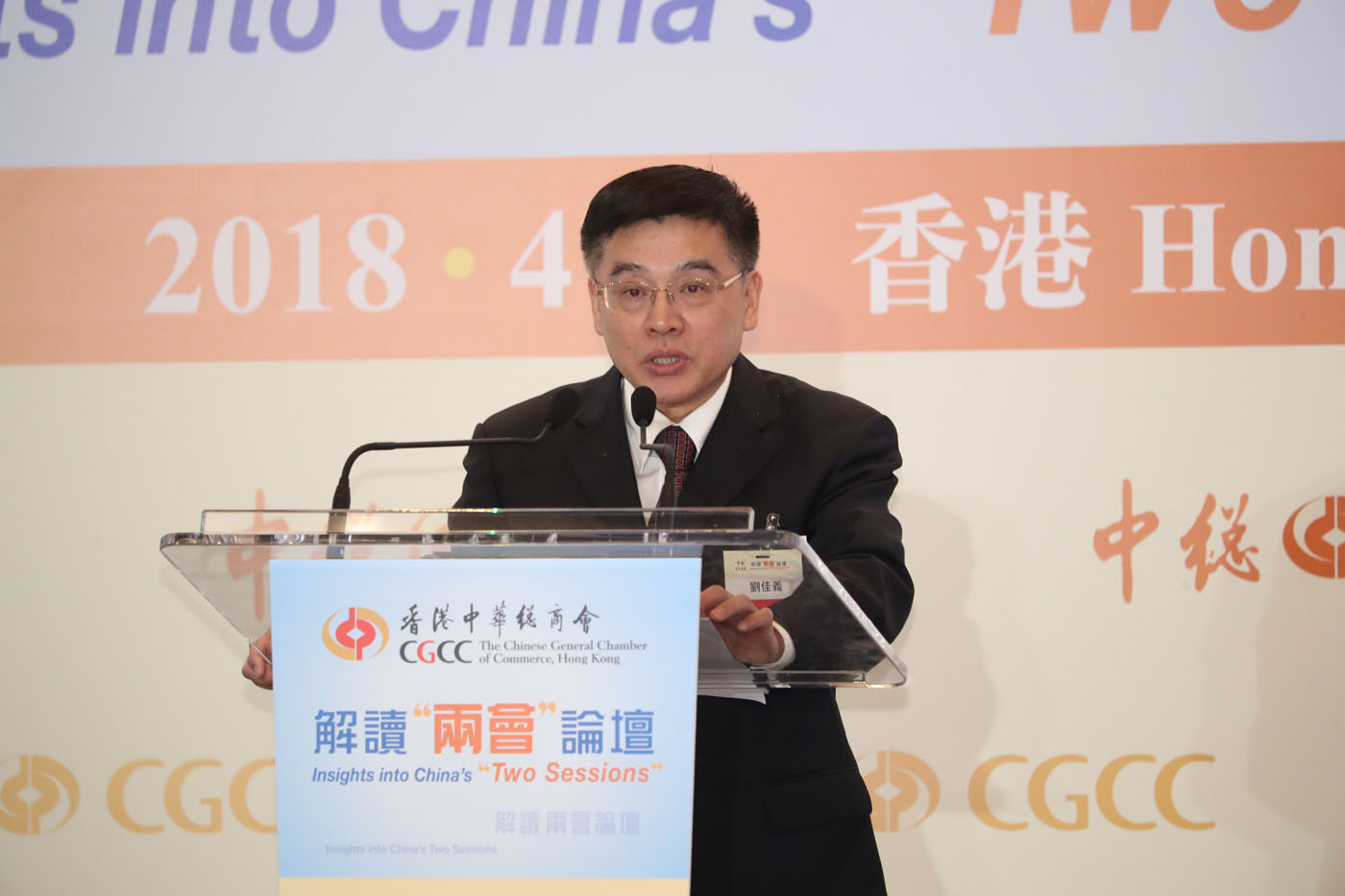 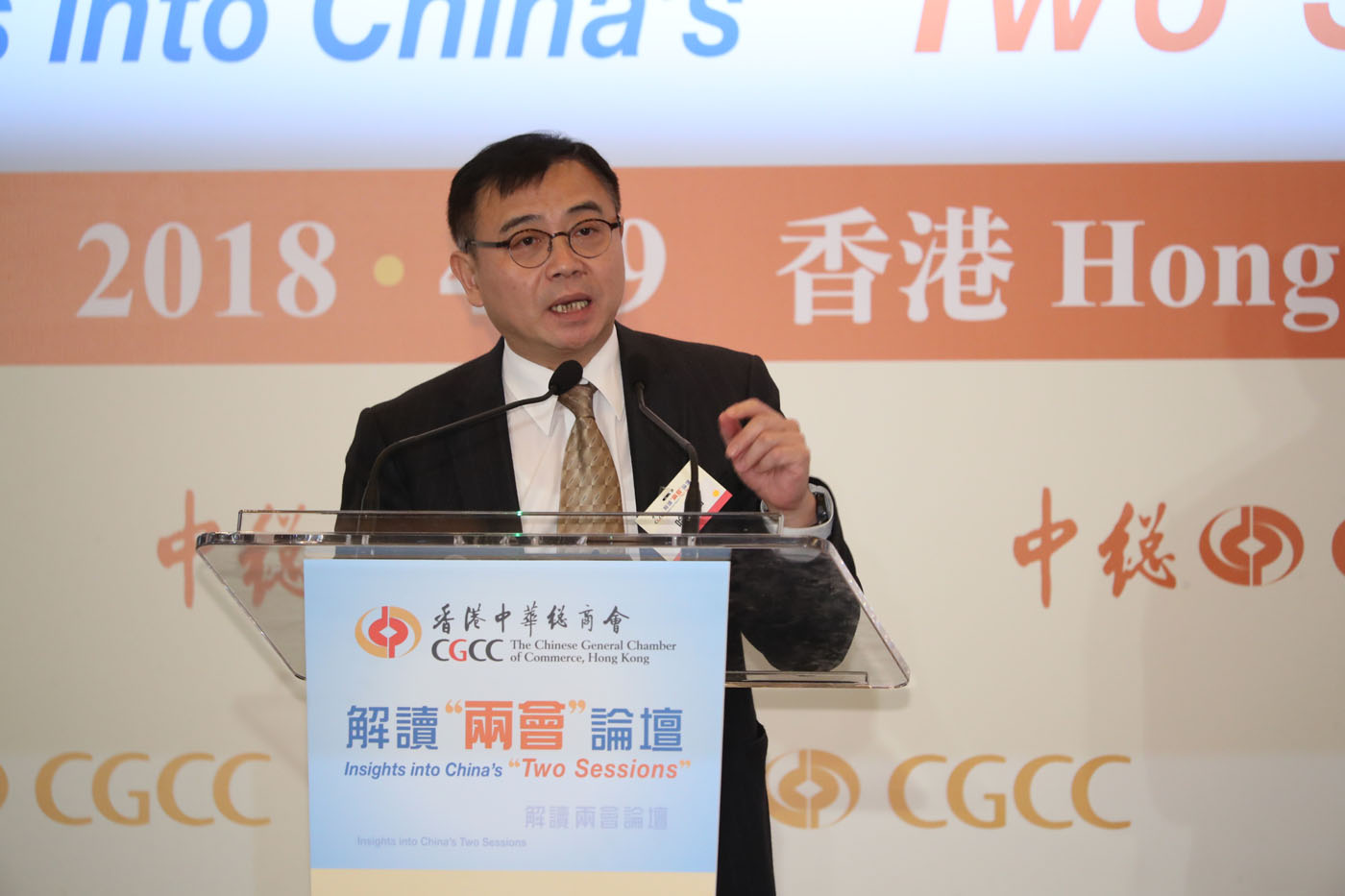 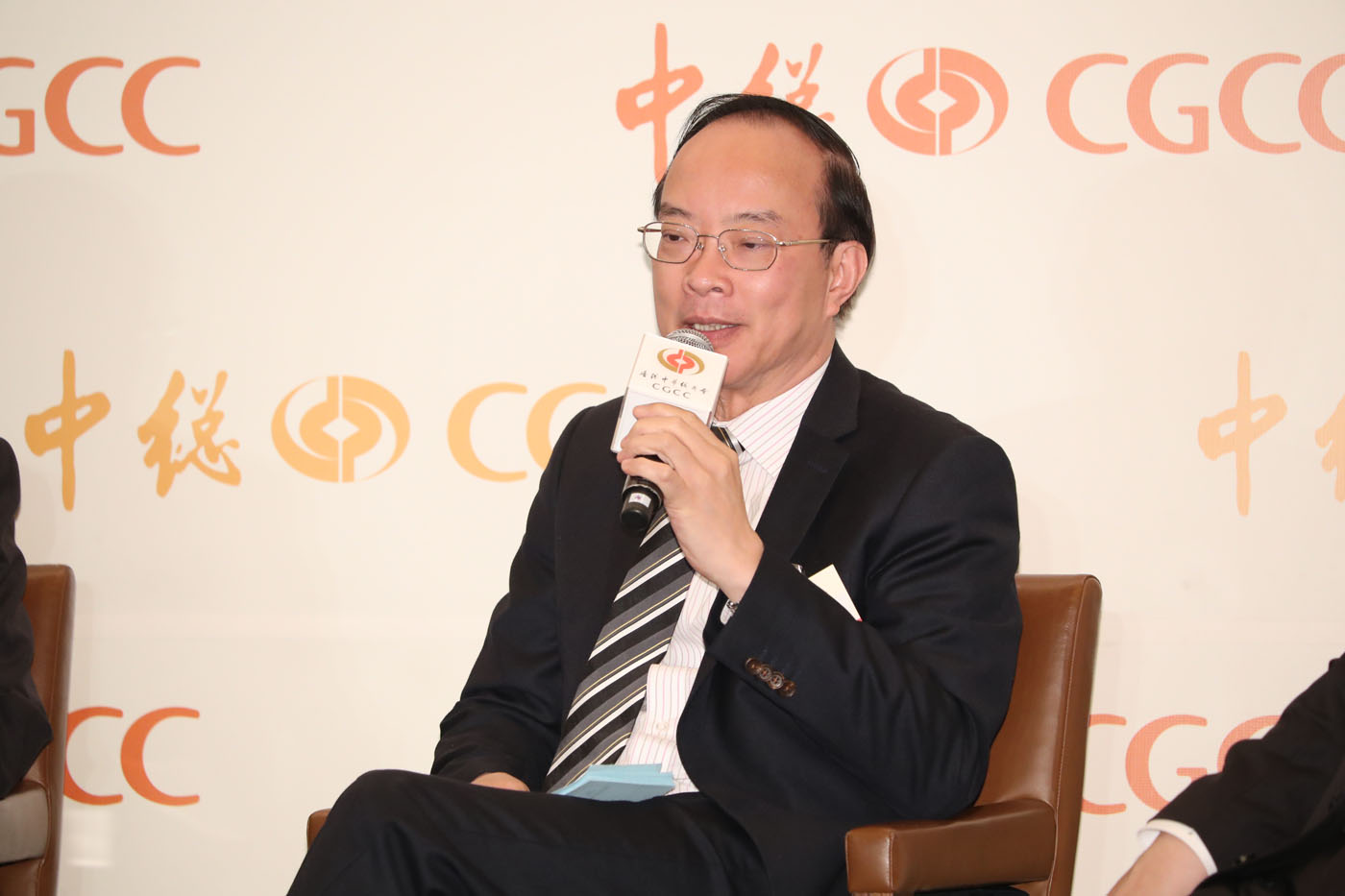 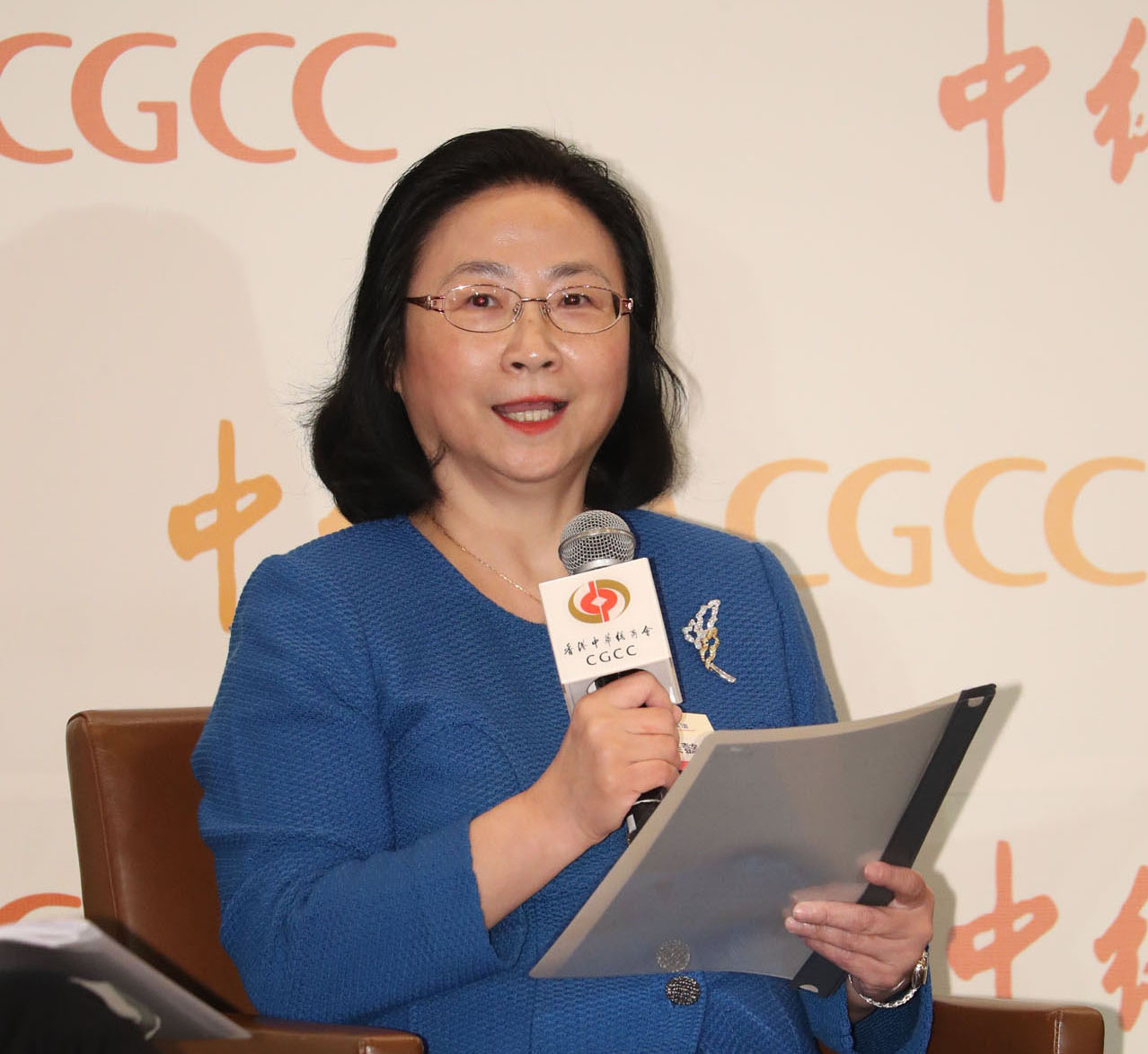 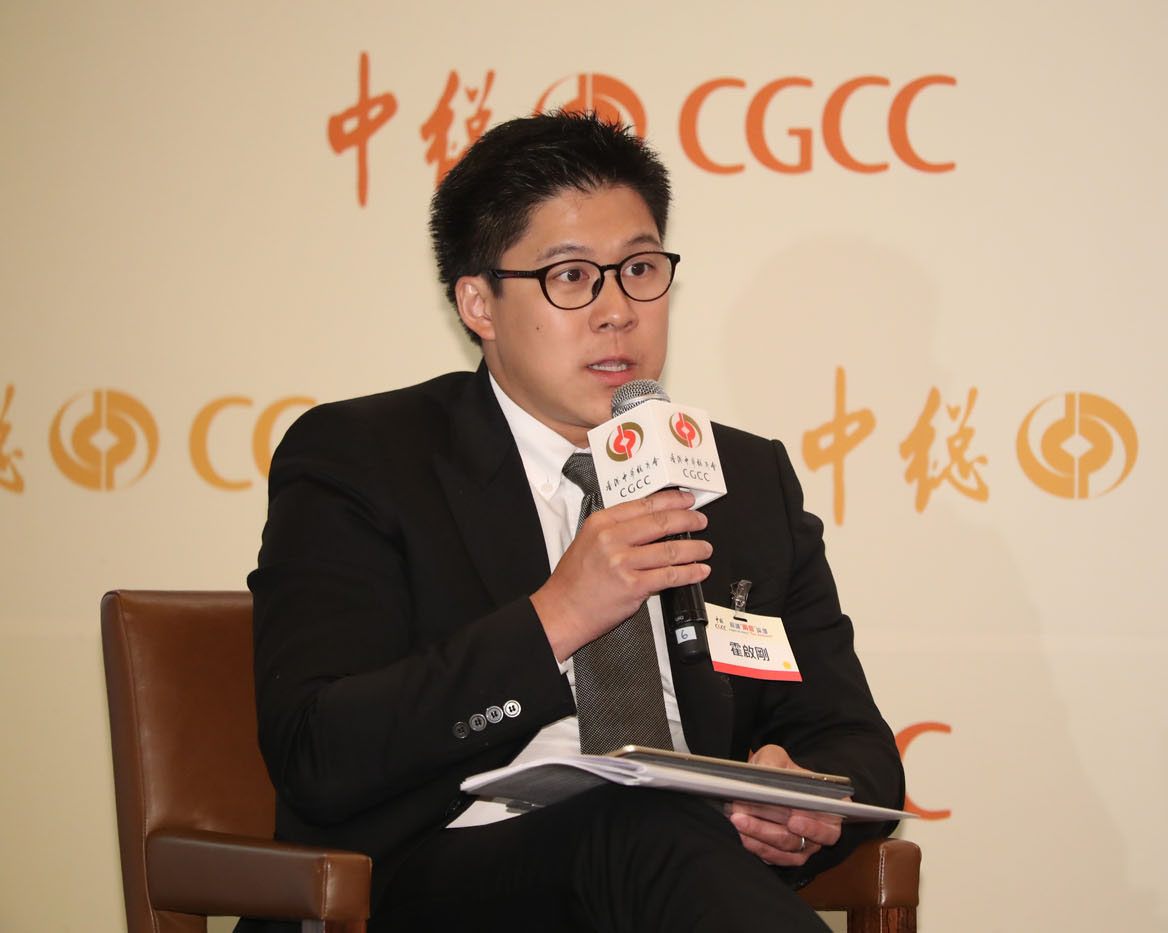 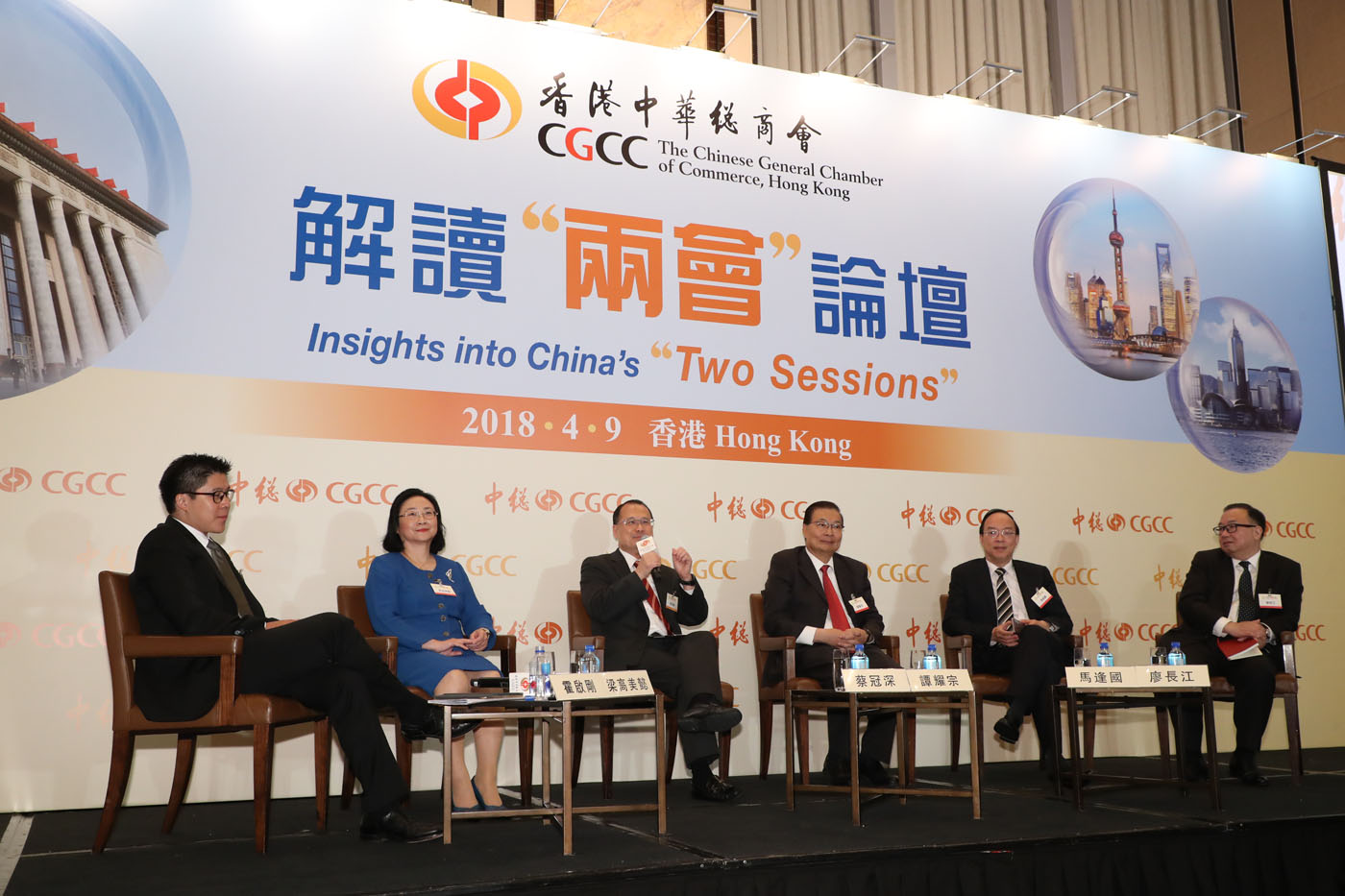 (Hong Kong, 12th April 2018) The Chinese General Chamber of Commerce (CGCC) organised on 9th April the Insights into China’s “Two Sessions” discussion forum. CGCC was honoured to have invited C Y Leung, Vice-Chairman of the CPPCC National Committee, Tan Tieniu, Deputy Director of the Liaison Office of the Central People's Government in the HKSAR, and Yang Yirui, Deputy Commissioner of the Office of the Commissioner of the Ministry of Foreign Affairs of the People's Republic of China in the HKSAR, to be the officiating guests at this year’s forum. Meanwhile, Dou Shuhua, Member of the NPC Standing Committee and Vice Chairman of the NPC Environment and Resources Protection Committee, Liu Jiayi, Vice Chairman of the Committee of Culture, History and Study of the CPPCC National Committee, and Ha Jiming, Senior Fellow at China Finance 40 Forum (CF40), delivered keynote speeches on the institutional reforms and economic policies introduced at the “Two Sessions” and shared their views on the long-term development of China.

For the panel discussion session, CGCC also invited a number of re-elected and newly appointed NPC and CPPCC delegates from Hong Kong as panelists. They included Tam Yiu-chung, Member of the NPC Standing Committee, Ma Fung-kwok and Martin Liao, both Deputies of the NPC, Margaret Leung and Kenneth Fok, both Members of the CPPCC National Committee, and Jonathan Choi, Standing Committee Member of the CPPCC National Committee and Chairman of CGCC. The panelists exchanged ideas on how the “Two Sessions” might provide opportunities and insights for Hong Kong’s economy, finance, culture as well as youth development.

In his welcoming address, Chairman Jonathan Choi said: “China’s growing economic power and influence have led the international community to pay more attention to the ‘Two Sessions’. Coinciding with the 40th anniversary of China’s Open Door Policy, the changes in the state leadership, amendments to the PRC constitution and reform of the national supervision system were among the hot topics of the ‘Two Sessions’ this year. The Government Work Report provides a detailed examination of the achievements and reforms made in our nation’s economic and social developments over the past five years. It also maps out the work plan for fully implementing the spirit of the 19th CPC National Congress. Amendments to the national constitution and reform of the national supervision system will lay a solid foundation for the further modernisation of China’s governance system and capability.”

He further commented: “The ‘Two Sessions’ put great emphasis on promoting Hong Kong’s long-term development. It was the first time the Guangdong-Hong Kong-Macau Bay Area plan was mentioned along with the integrated Beijing-Tianjin-Hebei megalopolis and the Yangtze River Economic Belt projects. As an international financial and commercial centre, Hong Kong can play a pivotal role in the future development of the Bay Area. With our unique advantage under the ‘One Country Two Systems’, we can join hands with Macau and other cities in the Pearl River Delta region and complement each other to achieve maximum synergy, such that the Bay Area may spearhead national economic development in the long run and serve as a strategic node in the ‘Belt and Road’ initiative.”

C Y Leung described the “Two Sessions” this year as “clean and righteous”. He remarked that the discipline of the meetings this year was particularly good with an exceptionally high attendance rate. Delegates adhered strictly to the session rules and were active in expressing their views, demonstrating a keen enthusiasm for political involvement and policy discussion. He lauded the Hong Kong delegates at the CPPCC for their earnest devotion and candid opinions. On the united front work in particular, Leung noted, the delegates shouldered the responsibility for explaining the Central Government’s policies and guiding the local society.

Leung also spoke on how Hong Kong could actively respond to the ideas put forth at the “Two Sessions”. Apart from attending the meetings, delegates would have to carry out concrete, long-term work as well. Leung emphasised that Hong Kong was never a bystander but a keen supporter and participant in the nation’s opening up. As China continues to deepen reforms and further open itself to the world, every Hong Konger could make contributions and seize opportunities for development.

Dou Shuhua remarked that a key focus of the NPC’s plenary session this year was the passing of constitutional amendments with an overwhelming majority. The amendments included: establishing the Xi Jinping Thought on Socialism with Chinese Characteristics as the guiding principle for the nation’s political and social development, substantiating the overall work for accomplishing Socialism with Chinese Characteristics and the second “Centenary Goal”, enhancing governance according to the law and implementation of the constitution, further upholding and reinforcing the comprehensive leadership of the CPC, amending the rules on presidential terms, and introducing the new National Supervision Commission and relevant regulations. Dou said that the amendments were a big move for China to push ahead with the comprehensive governance of the nation according to the law and the modernisation of its governance system and capability, and that they would provide a solid constitutional foundation for the realization of the two “Centenary Goals”.

Liu Jiayi outlined the assessment by CPPCC National Committee members of the Chinese economy. He expected the national economy to stabilise in the next two years at a slower pace of growth. 2018 would be the time for launching major reforms and the focus of economic regulation should be moderately shifted from achieving stable growth to facilitating reforms on the basis of risk control. Deepening supply-side reform is a major task for China, and the government must transcend the traditional thinking of a planned economy to cut excess capacity, reduce housing inventory, deleverage, lower corporate costs and improve economic weak links. It would also have to fight the “three tough battles” on curbing major risks, carrying out targeted poverty alleviation and preventing pollution. In particular, the government should monitor financial risks arising from the high level of latent bad debts and the high liquidity of financial assets, and strengthen regulation of the borrowing and financing practices of local governments.

Under the proposal approved at the “Two Sessions” to deepen reform of party and state institutions, the China Banking Regulatory Commission and the China Insurance Regulatory Commission were consolidated to become a single regulatory body. Ha Jiming suggested that the merger was to align the Chinese regulatory framework with international standards, and that it would help reduce regulatory arbitrage and prevent financial risks. On the merger of state and local tax authorities at the provincial level and below, Ha commented that this would not only resolve issues on delegating financial and administrative powers and reduce financial risks arising from the illicit activities of local governments to increase revenue, but it would also boost efficiency in tax collection and lower regulatory cost. As the Government Work Report reiterated the stance that houses are for people to live in and not for speculation, Ha expected the government to introduce a property tax in the near term. He believed that a more long-term regulatory mechanism would be introduced in the future to replace the current restrictions on home purchase.

Several NPC and CPPCC delegates from Hong Kong shared their views on what the “Two Sessions” meant for the city’s future development. Tam Yiu-chung said that cities in the Guangdong-Hong Kong-Macau Bay Area could explore cooperation in economic development, innovation and technology, as well as many other areas. The similar linguistic and cultural characteristics of the Bay Area cities make it possible for Hong Kong to join hands with the other cities on developing the cultural industries. Such collaboration may also incorporate the work on youth development to enhance the local youth’s appreciation of Chinese culture. Tam proposed organising a high-level Bay Area forum and setting up a Bay Area portal to disseminate information on the business landscape, the entrepreneurial ecosystem and the employment situation in the region, with an aim to deepen public understanding of the Bay Area.

Ma Fung-kwok pointed out that while the 11 Bay Area cities are all inheritors of the traditional Lingnan culture, Hong Kong’s colonial history and social openness have allowed it to develop maritime culture as well, which is conducive to its participation in the “Belt and Road” initiative. Ma also commented that the institutional reforms introduced at the “Two Sessions” were wide-ranging, covering the party, the government, the NPC and CPPCC, the judiciary, the armed forces and different levels of the central and local administration. He called on Hong Kongers to study the reforms and identity opportunities for development.

Martin Liao said that the national constitution, as a set of fundamental principles covering different generations, is bound to be “living” to keep up with the times and adapt to changes in the society. Timely amendments to the constitution are therefore necessary and expedient. Since the 18th CPC National Congress, China has made unprecedented achievements and it is necessary to include the important theories, practices, institutional reforms from the development process into the constitution, such that they may provide guiding principles and action agenda for the nation’s future development with a solid constitutional foundation. Liao also pointed to how the Xi Jinping Thought on Socialism with Chinese Characteristics was enshrined at the 19th CPC National Congress as a guiding principle of the CPC, and suggested that the latest constitutional amendments helped elevate the party ideology to a national level.

Margaret Leung believed the internationalisation of RMB was making gradual progress. While Hong Kong remains the world’s largest offshore RMB centre and boasts a sound regulatory framework, Leung called on the city to develop new drivers of growth. She suggested that Hong Kong might take the lead in setting up a Free Trade Port in the Bay Area, and that initiatives to internationalise RMB could be launched in Hong Kong on a pilot basis before they are introduced to Guangdong and eventually the rest of the world. Leung emphasised that Hong Kong’s sound legal system and international connection are its competitive edges, and that the city should continuously reinforce its strengths and competitiveness while actively participating in the national development.

Kenneth Fok said that China has been fast developing since its Open Door Policy, and that the government has not only made significant achievements in poverty alleviation, corruption fighting and environmental protection, but it has also shown great determination to tackle deep-rooted development issues. On the work on youth development, Fok suggested that more should be done on raising Hong Kong youth’s awareness of the Bay Area, and that the new Youth Development Commission should consider how to support local youth in partaking in the national development when devising its youth policies.

In concluding the discussion, Chairman Jonathan Choi said that China has entered a new era to focus more on qualitative than quantitative growth. People are not just going after money but are seeking a better quality of life. Their demands on environmental and food safety reflect the progress China has made over the years. Chairman Choi expressed full confidence in the nation’s future development.