Farming has always been given the cold shoulder in Hong Kong, but Gordon Tam, Founder and CEO of Farm66, decided to stem the current. Making great efforts to develop high-tech agriculture, his company is now Hong Kong’s agritech leader and receives professionals from America and Japan who come to learn from its successful model. 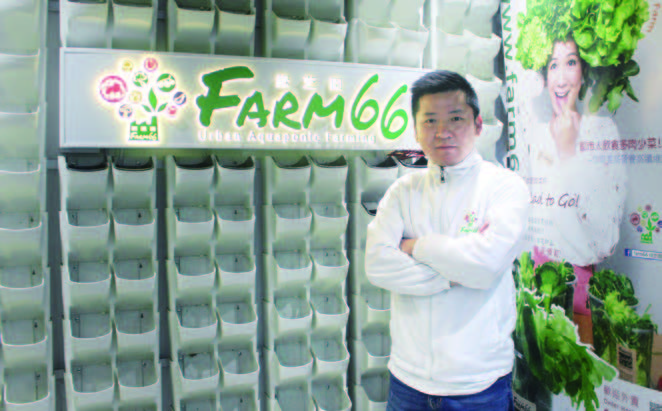 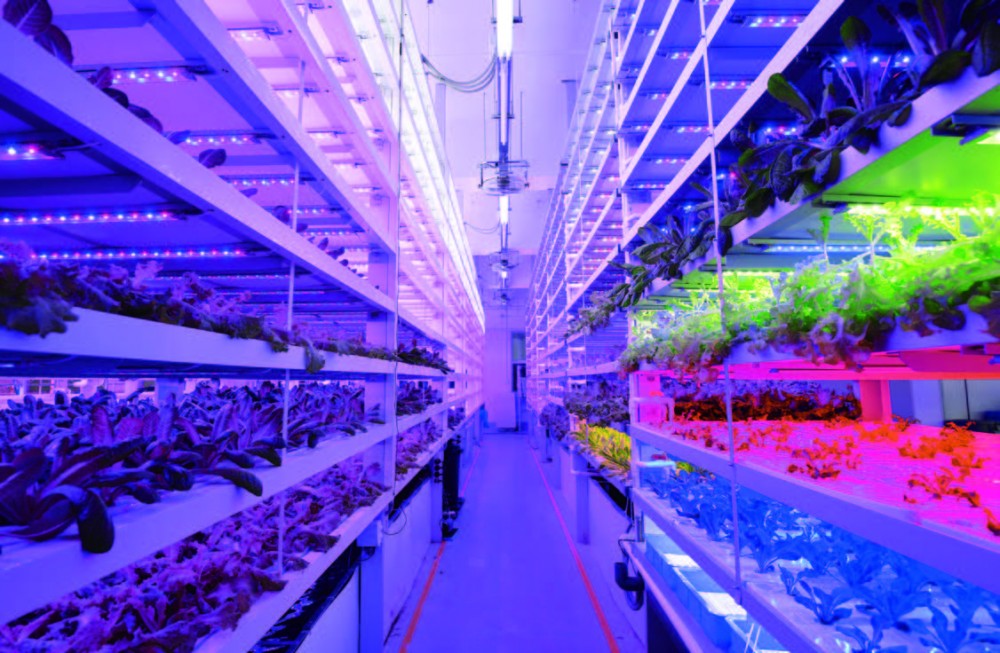 During his school days in the US, Tam had a summer part-time job at the agriculture department of his university for over a year. He was amazed by the highly focused deployment of farmland productivity and manpower in America and found great interest in agritech. After returning to Hong Kong following his graduation in 1997, he took part in poverty alleviation and teaching exchange activities on the Mainland. These experiences inspired him to promote farming as a means to help the needy and lift people out of poverty.

Translating words into action, Tam took an MSc degree course on sustainable urban development at PolyU where he came up with the brilliant idea of developing indoor farming. Troubled by food allergies at the time, he had to stay away from vegetables and other food products containing chemicals. His personal predicament plus the increasing public awareness for food safety and environmental protection motivated the plan of “growing your own vegetables”. That marked the beginning of his career as a “high-tech farmer”. 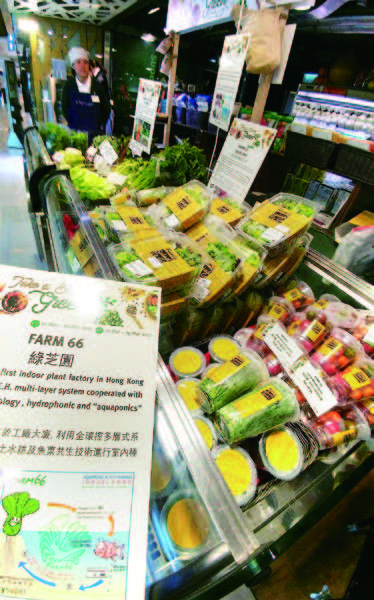 In 2013, Tam founded Farm66 with likeminded partners to develop indoor farming. They leased a 2,000 sf unit in an industrial building in Kwun Tong which was set up for multilayer vertical farming. However, due to space constraints, poor sunlight and water quality issues, seeds failed to sprout for a long time.

Tam sought help from traditional wisdom and devised an aquaponic eco-cycle. The vertical planting racks house fish culture ponds at the bottom. Waste produced by fish is treated into a fertilizer that can be absorbed by the plants above. By absorbing the nitrogenous fertilizer, the plants filter the water to create a favorable habitat for the fish. A positive eco-cycle is formed.

As for the lack of sunlight in the indoor farm, Tam solved the problem with “energyefficient LED wavelength farming”, his own invention based on wavelength technology. The plants receive a spectrum of light in different colors, complemented by the right humidity and temperature for optimal growth. The result is healthy vegetables free of additives. Harvest has become increasingly stable and patents for the two indoor farming technologies mentioned above have been applied. 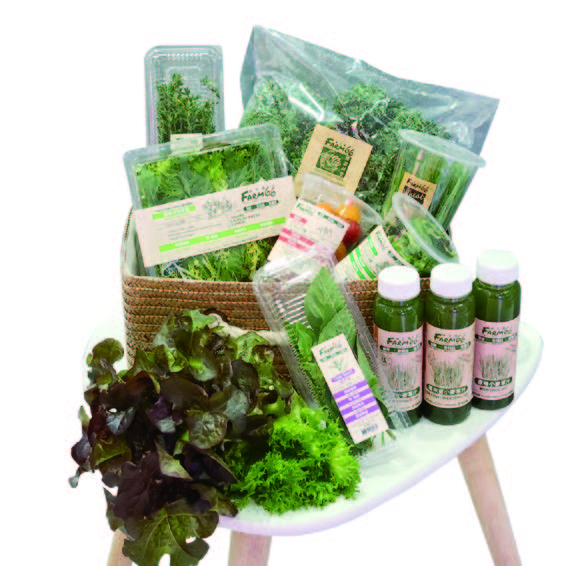 As the operation got underway, Tam and his team concentrated on precision planting and introduced fully-automated high-tech management. By dint of a sustainable aquaponic system suited to the urban environment, production efficiency was improved to ensure quality, hygiene and safety of farm crops.

In 2017, Farm66 clinched Alibaba Entrepreneurs Fund’s Jumpstarter Award after beating more than 1,000 competitors, winning investment funding of over USD1 million. Subsequently, the company joined the Cyberport Incubation Programme, which provided financial support for relocation to a 20,000 sf factory unit in Tai Po Industrial Estate. It opened up a clear and promising path for future growth. 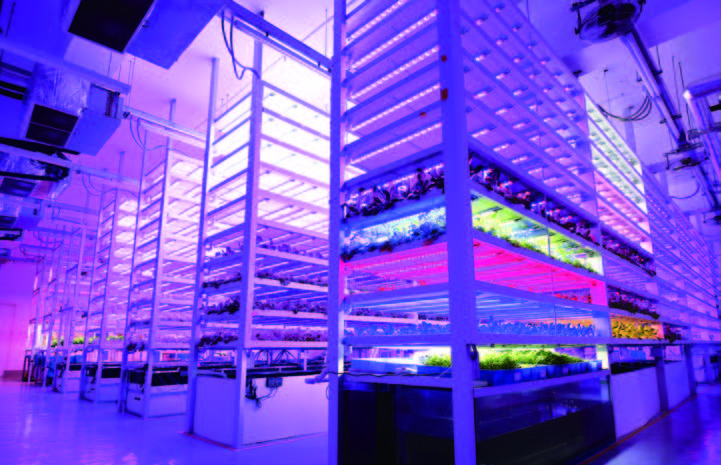 Looking back to his startup story, Tam admitted it was not smooth sailing all the way. When they first farmed in an industrial building, they were imposed an encumbrance registration at the Land Registry for breaching lease conditions. Fortunately, after negotiating with the relevant authority, the company was later given permission to do so. He recalled with joy that they could finally farm indoors legitimately.

Farm66 now offers 50 different vegetables which take between 25 and 35 days to grow, cutting production time by half as compared to traditional farming. Up to 95% less water is consumed during the farming process, and the annual output per square foot is 60 times higher. Their quality veggies are well received by consumers. Today, Farm66 has regular orders to supply mid-market and high-end supermarkets as well as five-star hotels in Hong Kong. 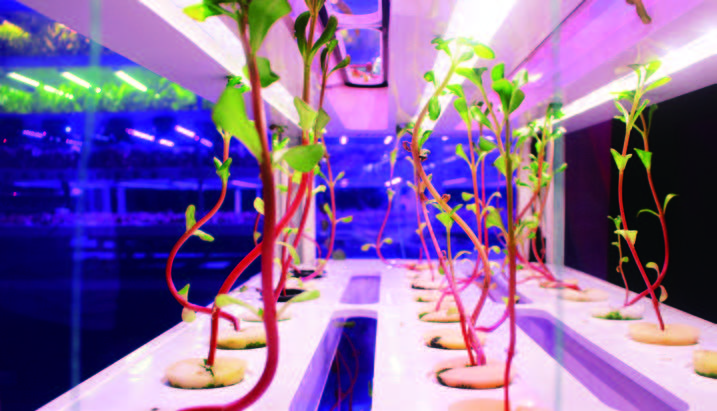 Tam revealed that Farm66 is currently discussing with Hengqin International Hitech Innovation Park for leasing a 90,000 sf unit as an indoor farming plant. The plan is to export “Hong Kong veggies” to Guangzhou and Macao in the future and launch studies into cultivating Chinese medicine herbs and plants as well as their therapeutic efficacy. These efforts will work in synergy with the Traditional Chinese Medicine Science and Technology Industrial Park to promote the industrialization of Chinese medicine.